5 things to do on the weekend at NYU Manhattan: 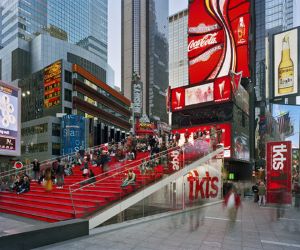 You could do what the tour books and many of the guides for study abroad students say, such as visit the Museum of Modern Art. But there are several limits to doing only these, beginning with that so many people do them. Here are some things to do, some of which aren’t found in the books:

The locals will tell you to avoid here. This is the only activity on this list that gets highlighted repeatedly in tourist books. Known as “The Crossroads of the World”, one can find street performers, costumed characters, and maybe even a public marriage proposal. The way New Yorkers do things there can’t be done anywhere else. But there are also lots of people, and movement is incredibly slow. I would recommend visiting once to take in the scene, including the famed red steps. After that, one should avoid 7 Ave from 42 to 47 Sts.

Given that we’re often in a rush, that the time isn’t always convenient, and that there are so many of them, there’s a tendency to ignore them. Anyway, as for the performers, you might get a comedy routine, cover band, or flipping over five people. There’s one cover band that I’ve seen many times and now they recognize me when I come by. In fact, sometimes I stay around for a while before heading to my next place.

3. Eat at Katz’s Deli (the original on the Lower East Side):

If you have about 25 USD, you can have what I think is the best meat sandwich in Manhattan. I’ve had both the corned beef and pastrami many times; it comes down to preference. If it makes a difference, the former is a dollar cheaper. The meat portion is generous enough that you might not even finish the sandwich. If you want sides, there are options. The only one I’ve tried is the fries, which I don’t recommend.

This comprises the Fulton Center, WTC Station, the 1 WTC Observatory, and Brookfield Place. To summarize, it’s a giant mall, though the reality is far more than this. For food lovers, there are food options everywhere on the Brookfield Place side, and an Eataly (Italian market) in the WTC station. For those interested in architecture, the headhouse of the station is shaped like a phoenix, with a window that opens in the summer. For transit lovers like me, there are a lot of lines, including one to New Jersey to observe.

Namely 34 St-Hudson Yards on the 7 and the three stations on 2 Ave on the Q. The subway has a reputation for being dirty, inaccessible, having many late or canceled trains, the list goes on for a while. These are well deserved labels. But as for the new stations, they’re worth visiting not only because they’re new, but also because they’re a stark contrast to the rest of the subway, as well as an example of what stations could look like.